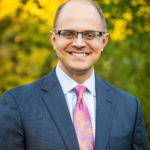 Pastor Jeremy Kobernat was born in Santa Clara, California, where his parents worked on staff at North Valley Baptist Church and School. Shortly after he was born, his family moved to Rockford, Illinois, where his father served as a Christian school teacher for nearly twenty years before becoming the pastor of First Baptist Church in Geneseo, Illinois. As a teenager, Bro. Kobernat attended a youth conference at North Valley Baptist Church and surrendered his life to preach the gospel. After graduating from high school, he enrolled in Golden State Baptist College and began to prepare for the ministry. Bro. Kobernat graduated in 2001 with a degree in Pastoral Theology and accepted a position as an assistant pastor with his father at the First Baptist Church in Geneseo, Illinois. He and his wife Joanna were married in March of 2002, and they served there together until they joined the staff of Golden State Baptist College in 2005.

On Sunday, January 5, 2014, the people of the Victory Baptist Church voted to make Bro. Jeremy Kobernat their pastor. Together, Pastor and Mrs. Kobernat have five children—Lacey and Savannah (twins), Chloe, Kylie, and Micah.